Whether it’s the scientific name or the variety name of a particular coral, reef aquarists want to be able to identify what they have in their tanks. The identity of a coral offers critical information.

What’s This One Called?

Members of the same species generally have the same husbandry requirements. Knowing a new specimens species assignment can tell you what kind of lighting it might need, how it might grow and if you need to worry about it killing it’s neighbor in three months. Members of the same species, however, can sometimes be quite different, especially in their coloration. So aquarists give (often humorous) names to corals with particularly nice color morphology. These names serve as identifiers for particular individuals. They let you know what your dime sized frag will look like in 2 years and may even provide a link back to the original owner. Just as every show dog must come with papers from a respectable breeder, these names can vouch for a coral’s genealogy. 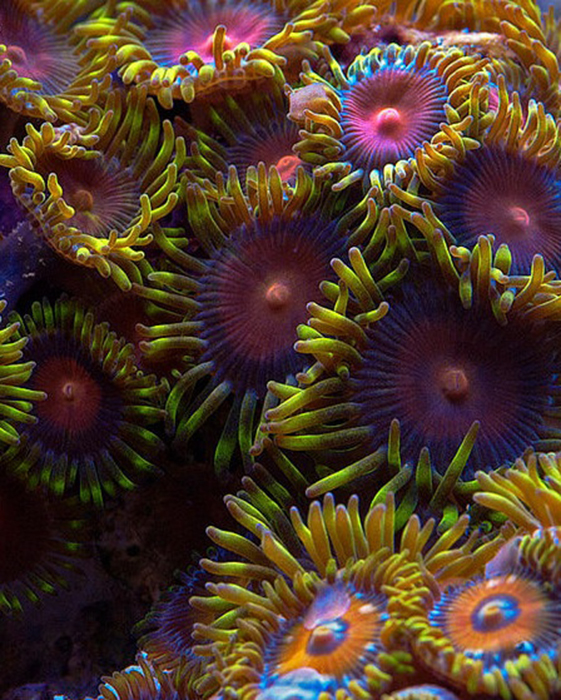 Z. sansibaricus and Z. sociatus are some of the most common Zoanthids kept
in the hobby, they also may be the most diverse in color morphology.
Photo by Sanjay Joshi.

The scientific name and the name of the variety both provide critical information to the aquarist. All too often though the scientific name is left out in favor of only using the variety name. This practice is perhaps most common among Zoanthid enthusiasts, where the variety name reigns supreme. Sure SPS and LPS keepers have their fair share of variety names for their corals, but they will happily point outAcropora millipora, Montipora digitata and Pocillopora damicornis, or Acanthastrea lordhowensis,Euphyllia ancora and Echinophyllia aspera to you. You would be hard pressed to find a hobbyist that could correctly identify three species of zoanthid in their tank though. Why is that?

How Many Species Are There?

The state of cnidarian taxonomy is indeed quite messy, and it is perhaps reasonable to argue that the state of Zoantharia (zoanthids) is a bit messier than Scleractinia (hard corals). A quick look over the species of Zoanthids described in the scientific literature gives a list of more than 100 species (Fautin, 2003). These species are often described with detailed morphological measurements like thin-sectioning the polyp through the gastro-vascular cavity and counting the number of septa, an uncommon practice amongst aquarists. Further, the described range for many of the species is quite small, requiring collection location to be known in most cases for species identification. So it is perhaps no wonder Zoanthid keepers often do not bother with Latin names. Recently, however, a Zoanthid researcher, Dr. James Reimer, has been using DNA based techniques to ask the question “How many species of Zoanthids are there?” Having published several new studies (Reimer et al. 2004, 2006a, 2012), his answer to the aquarist might be “Not so many that you couldn’t know them all by name.” 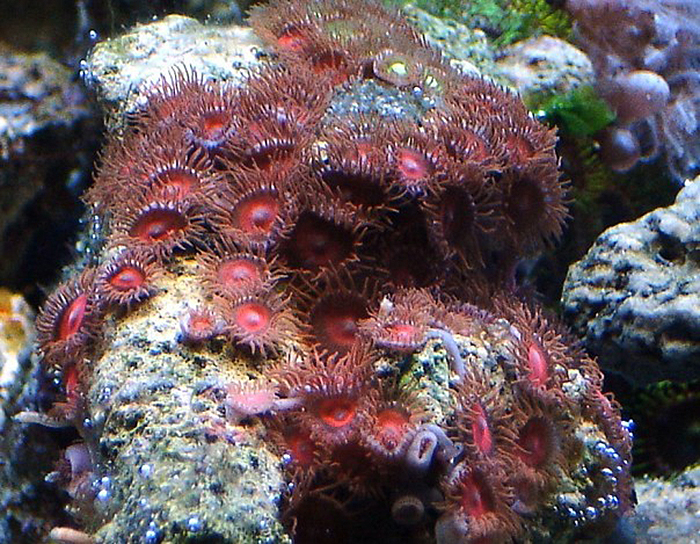 These studies suggest that many of the previously described species are just redundant names for a few widely distributed species (Reimer et al. 2004, Reimer et al. 2012). In light of these findings, it is now possible to have a relevant discussion regarding the species identity of Zoanthids, focusing on the twelve most commonly encountered species in the hobby. After removing the redundant names, many of the remaining named species of Zoanthus and Palythoa exist in sibling species pairs between the Pacific and Caribbean (Reimer et al 2012). You can think of them as identical twins in species terms. Many of these species pairs appear identical because there hasn’t been a lot of evolutionary time since the split between the Caribbean and Pacific. It is for this reason that I have lumped the sibling species pairs together in their descriptions below, because without collection location or genetic information you will not be able to tell them apart. The two ocean basins, however, offer very different Symbiodinium (Zoox) communities so the sibling species pairs differ in the species of Symbiodinium that they associate with. In cases where there are key differences between species because of the symbiont they associate with, information on their symbiotic associations is provided. With the information below you should be able to identify the species pair that most of the Zoanthids you encounter in the hobby belong to. If you are provided with collection location you can determine the actual species name of the specimen.

Hello, My Name Is… 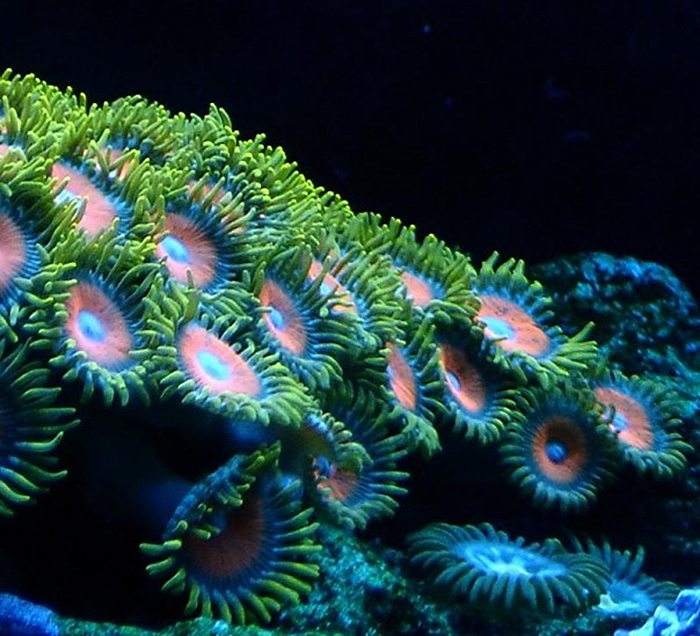 Eagle Eyes, a common color variety of Z. sansibaricus in the hobby.

Zoanthus sansibaricus (Indo-Pacific) Zoanthus sociatus (Caribbean)
Aquarium ID: Look for interconnected polyps with oral disks 6-10mm in size Reimer et al. 2004), often with pink ring around closed polyp but this is not always present so shouldn't be used as diagnostic. This may be the most common type of Zoanthus in the aquarium trade.
Common Variety Names: Eagle Eyes, Wham'n Watermelon, Radioactive Dragon Eyes and many, many more.
Known Symbionts: (Z. sansibaricus) Primary symbiont Symbiodinium C3ee-ff(AKA C1z Reimer 2008) high light adapted. Also found in association with a clade A Symbiodinium but only in colonies that are under light and desiccation exposure at low tide. Additionally, a different Symbiodinium C type is found in deep colonies around Japan. (Z. sociatus) Primary symbiont is C1 (Lajeunesse et al. 2002), a wide spread host generalist symbiont that associates with many coral taxa. It is adapted to high light but may be sensitive to temperature stress.
Japan Deep-water Zoanthids: Most Zoanthids traded under this name are Z. sansibaricus and this is the only member of the genus discussed here that has collection records as deep as 35m (Reimer et al. 2004, Kamezaki et al. 2013, Wham et al. 2013). Genetic evidence does not support differentiation between shallow and deep colonies (Kamezaki et al. 2013, Wham et al. 2013), however, symbiotic association does vary across depth (Kamezaki et al. 2013). It is possible that Z. sansibaricus colonies might be collected from a deep location and designated “Deep-Water” and exhibit a preference for lower light. It is, however, unlikely that colonies sold under this designation are truly from Japan. In the author’s opinion, it is unlikely that the colonies even originate from deep collections. The lack of genetic differences would indicate that the exact color morphs could be found in both deep and shallow locations and symbiotic association would likely change to match aquarium conditions in a few months. In short, the Japan Deep-water designation is probably just hype and the designation should be dropped from the hobby. 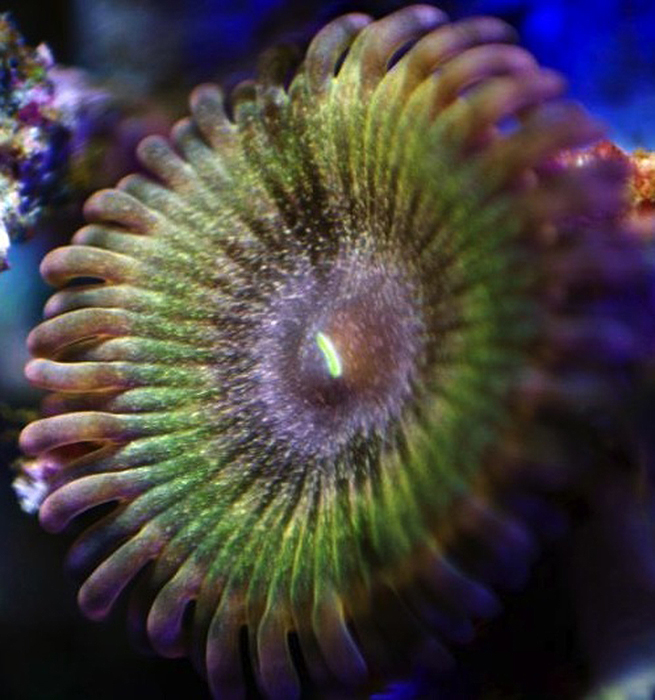 Zoanthus gigantus (Indo-Pacific) Zoanthus solanderi (Caribbean)
Aquarium ID: They can be identified by their larger size, often having green mouths and generally display a “stripped” pattern on the closed polyps (Reimer et al 2006a). Oral disk ranges in size from 10-25mm (Reimer et al 2006a), some individuals may even be larger. They are often referred to as “Palys” this should be actively discouraged by the community, as Paly is short for Palythoa and they are not part of the Palythoa Genus.
Common Variety Names: PPE, RPE, basically all the “People Eaters”.
Known Symbionts: Zoanthus gigantus (Indo-Pacific) Unnamed C1/C3 related Symbiodinum specific toZ. gigantus found in high light environments. DNA evidence suggests that it is closely related to C3ee-ff found in Z. sansibaricus (Reimer et al. 2006b), which would explain its similar lighting preferences.Zoanthus solanderi (Caribbean) No identification of associated Symbiodinium has been preformed on this species. 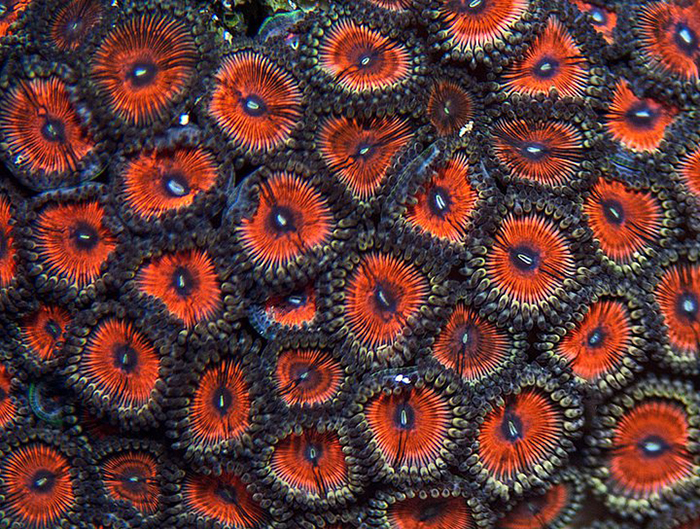 Zoanthus pulchellus (Caribbean) Zoanthus vietnamensis (Indo-Pacific)
Aquarium ID: polyps of 4-6mm in diameter, height of 4-30mm and 50-60 tentacles ((Reimer 2010, Reimer et al. 2012). I however have observed larger polyps. They are generally larger than Z. sansibaricus and Z. sociatus but smaller than Z. gigantus and Z. solanderi generally they have white mouths and lack the large stripes found on the closed polyps of Z. gigantus and Z. solanderi. Oral disks are often colored red, pink or purple with a radial pattern extending from the center.
Common Variety Names: Armor of God, Armageddon, Bowser, Candy Apple Red, DayTrippers, Goochsters.
Known Symbionts: Zoanthus vietnamensis (Indo-Pacific) Found in association with a relative of C15 (Reimer 2008) a particularly robust symbiont that is tolerant of a number of environmental stressors including temperature stress. Zoanthus pulchellus (Caribbean) No identification of associatedSymbiodinium has been preformed on this species, however it should be noted that C15 does not occur in the Caribbean and so Z. pulchellus may not show the same degree of stress tolerance as its sister species owing to its likely association with a generalist symbiont such as C1. 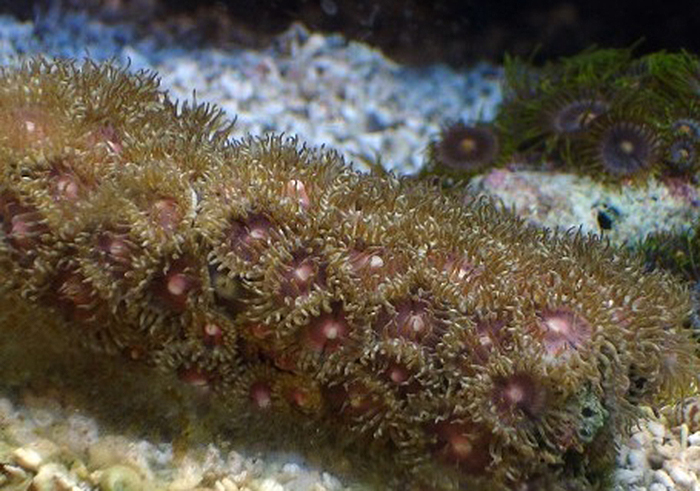 A frag of Z. kuroshio grown from a wild collected colony in the author’s aquarium. Polyps of Z. sansibaricus or Z. sociatus appear in the background.

Zoanthus kuroshio (Indo-Pacific) Zoanthus aff. pulchellus (Caribbean)
Aquarium ID: Polyp openings only rise a couple of mm above the encrusting base when closed. Unlike the other members of Zoanthus, polyps are embedded into the coenechyme forming a distinctively mat-like colony. The polyps of Z. kuroshio (Indo-Pacific) are often pink in color (Reimer 2010) with a radial pattern extending from center and a white mouth, very similar to Z. pulchellus and Z. vietnamensis. The polyps of Zoanthus aff. pulchellus (Caribbean) often occur in a larger variety of colors. These species often suffer from a white fungus or mold like disease and are very difficult to establish in the aquarium.
Common Variety Names: Often sold as Bubblegum Pink Zoanthids.
Known Symbionts: Similar to its close relative Z. vietnamensis, Z. kuroshio (Indo-Pacific) associates with a C15 related symbiont (Reimer 2008). No identification of associated Symbiodinium has been reported for Z. aff. pulchellus (Caribbean)
Distinguishing the Genus Palythoa from Zoanthus
Members of Zoanthus do not incorporate sand into their polyps, members of Palythoa do incorporate sand and other debris into their polyps. The confusion in the hobby is mostly from the incorrect usage of “Paly” to refer to individuals of the species Zoanthus gigantus, Zoanthus solanderi. This should be actively discouraged because it creates unnecessary confusion between the otherwise easily distinguished genera. The genus Protopalythoa is not a valid genus, with all of its members now assigned to Palythoa (see Reimer et al 2006a). 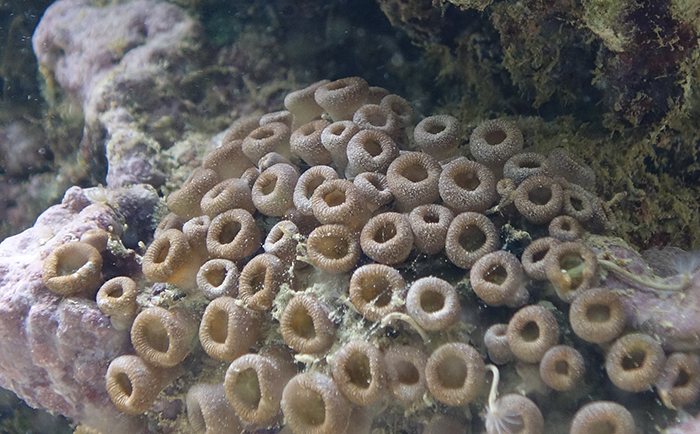 The polyps of P. mutuki, like all members of the genus Palythoa, feel rough to the touch because they incorporate sand into the outer layer of their polyps. Photo by Allison Lewis.

Palythoa mutuki (Indo-Pacific) Palythoa grandiflora (Caribbean)
Aquarium ID: Polyps may be unitary or interconnected but are not embedded into the coenechyme (Reimer 2010). Oral disks are often brown or green. Tentacles are generally long and straight in contrast to the curled appearance of the tentacles of Palythoa sp. “singapura” this, however, is not a perfect diagnostic.
Common Variety Names: Green Implosion 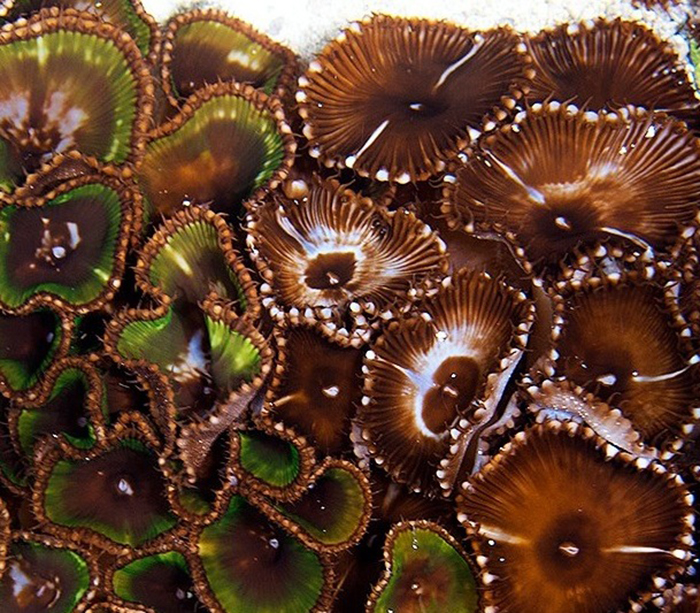 Palythoa grandis may not be the most colorful zoanthid but it can be a great addition to a reef aquarium. Photo by Sanjay Joshi. 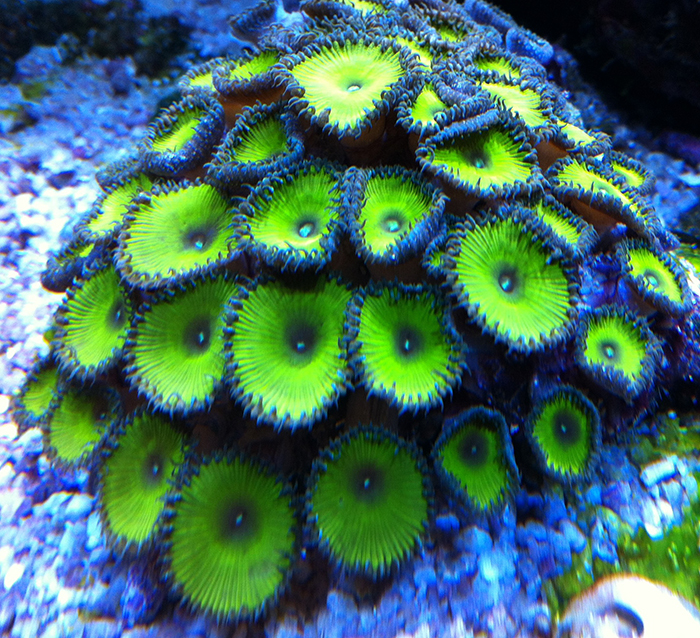 Nuclear Green and other similar Palythoa belong to a species described by Reimer and Todd in 2009 from Singapore. The species does not have an official name yet but should be referenced as Palythoa sp. “singapura”.